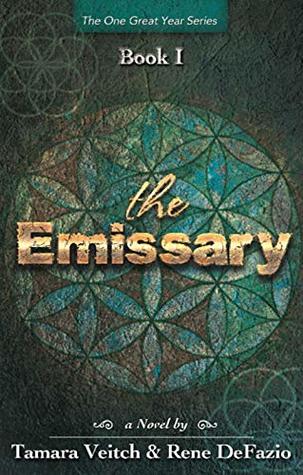 When the world collapses from a Golden Age into one of chaos and strife, mankind’s salvation lies in the hands of eternal Emissaries― guardians chosen to protect the secrets of a sacred, ancient civilization and to guide humanity back to enlightenment even as its darkest hour approaches. A timeless tale of love reborn through the ages.

Marcus and Theron are two lovers bound by an eternal and unshakable bond. As a series of catastrophic events nearly destroys their world, the two along with a chosen few become Emissaries destined, over the course of 13,000 years and through many reincarnations, to lead humanity into an era of peace and prosperity as foretold by the Elders of their race. But the forces of evil have taken possession of one man, Helghul, who relentlessly pursues Marcus and Theron through time, determined to destroy them and ruin all hope for salvation. The Emissary tracks Marcus’s epic adventure across centuries of human civilization to present day, where envoys of darkness gather threatening to bury the life-giving secrets of Atitala forever.

Good and evil come to blows and the future of mankind hangs in the balance.

Veitch and DeFazio’s award-winning debut novel deftly blends elements of a fantasy- adventure with historical fiction to create an unforgettable, fateful tale of eternal love, undying devotion, betrayal, suffering and the hope that binds us all.

About the Authors: What happens when two passionate writer-artists fall in love and decide to make an uncommon life together? The One Great Year novel series is just one of the awesome possibilities!

Born and raised in the Vancouver area, Rene DeFazio is an actor, screenwriter and producer with numerous film and television roles to his credit, as well as countless commercials and print ads. After spending many years backpacking and filming, Rene drew upon an abundance of unusual and exciting experiences to create One Great Year: The Emissary. His tireless research and firsthand knowledge of exotic locations, customs, sights and scents helped to bring this epic story to life. Rene was awarded an Empowered Writers Award at the 2014 World International Peace festival in Vancouver.

Tamara Veitch was also awarded an Empowered Writers Award at the 2014 World International Peace festival in Vancouver. Since an early age Tamara knew that she was a writer. She studied English and General Arts at Simon Fraser University and has had articles published in Guided Synergy Magazine, Awareness Magazine (Southern California), and Mosaic Magazine. Tamara is an experienced mural artist, teacher and public speaker and has toured with Rene presenting the groundbreaking research and discoveries behind their novels.

The One Great Year Series has been developed over nine years and has been optioned to be developed into a film or television series.

The authors are currently completing the second and third books in the One Great Year Series and hope for Book II to be released early 2019.

My review: The Emissary is the first book in the One Great Year Book series written by Tamara Veitch and Rene DeFazio. A novel about a war between the immortal forces of good and evil as it stretches over many lifetimes. The Emissary is the first in a trilogy series on he Atitalans. This group of supernatural beings was sent to Earth to help guide the humans to help them adjust through the evolution of the next “Great Year.” A story that is engaging and written with a passion that is sure to stay with long after reading. Veitch and DeFazio have created a world of the unknown that is unlike any other. A world where you never know what is lurking just beyond the shadows. The Emissary is a thrilling and exciting first book in a fascinating series that ends with a  To Be Continued note for a cliffhanger.  ** I received a complimentary copy in exchange for my honest and unbiased review. This post contains affiliate links and I will be compensated if you make a purchase after clicking on my links.**