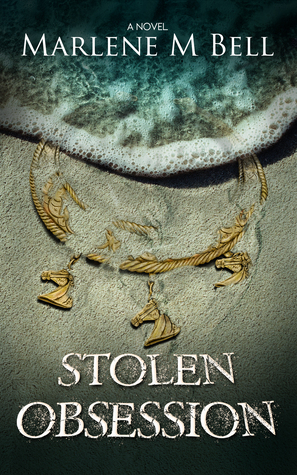 Stolen Obsession: Annalisse Series Book 1 by Marlene M. Bell was published on January 12th, 2018 by Ewephoric Publishing and is a mystery romance thriller.  People die, but legends live on.

New York antiquities appraiser Annalisse Drury recently lost her best friend to murder. The killer’s identity may be linked to her friend’s expensive missing bracelet—a 500-year-old artifact that carries an ancient curse, one that unleashes evil upon any who dare wear the jewelry created for the Persian royal family.

Weeks later, Annalisse sees a matching necklace at a Manhattan gallery opening. She begs the owner to destroy the cursed piece, but her pleas fall on deaf ears—despite the unnatural death that occurs during the opening. With two victims linked to the jewelry, Annalisse is certain she must act.

Desperate, Annalisse enlists the gallery owner’s son to help—even though she’s afraid he’ll break her heart. Wealthy and devastatingly handsome, with a string of bereft women in his wake, Greek playboy Alec Zavos dismisses Annalisse’s concerns—until his parents are ripped from the Zavos family yacht during their ocean voyage near Crete.

Annalisse and Alec race across two oceans to save his mother, feared dead or kidnapped. When the killer changes tactics and goes after Alec behind Annalisse’s back, can her plan to rescue Alec’s mother save them all?

About the author:  Marlene M. Bell is an acclaimed artist and photographer as well as a writer. Her previous book, a memoir entitled Among the Sheep, offers a look into her life history, along with a selection of written works on the subject of care and breeding of sheep. She and her husband, Gregg, have raised breeding stock of nationally renowned, purebred Horned Dorset sheep for over thirty-five years. Marlene is considered one of the foremost experts in this field of livestock and writes on the subject often. Marlene’s art photographs of sheep landscapes grace the covers of publications such as, Sheep!, The Shepherd, Ranch & Rural Living and Sheep Industry News. Ewephoric, her mail order venture, began in 1985 out of a desire for realistic sheep stationery.

Marlene and her husband reside on a wooded ranch in East Texas with their Dorsets, a lovable Maremma guard dog named Tia, and 3 spoiled cats who rule the household.

My Review: Stolen Obsession is a beautifully written novel that is the first book in the Annalisse Book Series by Marlene M. Bell. A mystery romance thriller that is hard to put down with a curse, antiquities, and murder making this an intriguing read. Not to mention a handsome man, drama, and deception helps to add all the main elements for a mystery that will stay with you long after reading. There are a few twists and turns along the way with an ending that is sure to surprise you. Stolen Obsession is a fast-paced read that is perfect for anyone who loves a good romance with a hint of mystery.